This page contains all the resources I have on toasters: how to choose one, does it make sense to spend extra on one, can you cook something in it, etc.

What is a toaster?
A toaster is an electric kitchen appliance that cooks thin slices of bread until they become brown and crispy. It is very simple and easy to use in order to prepare a fast and tasty breakfast or dinner. A toaster uses radiant heat applied to sliced bread that worms it up and makes it into a toast. The most popular type of toaster is a 2-slice or 4 slice pop-up toaster used for toasting bread or waffles. The second one is a toaster oven, useful for preparing sandwiches, bake pizza, or even roast meat and vegetables. The third type of toaster is a high-performing conveyor toaster best used for continuous toasting, suitable for professional and commercial kitchens.

How does a toaster work?
A toaster consists of a metal holder with bread racks that can lower and raise the bread. Two nichrome sheets are placed on each side of the racks. Once you push the handle down and bread is inside a toaster, power is applied to nichrome wires wrapped around sheets that create heat. This is infrared radiation produced to caramelize starch and sugar inside the bread. A circuit, which acts as a timer, is activated by pushing the handle down. It consists of transistors, resistors, and capacitors. A capacitor is charged through a resistor, and when it reaches a certain voltage it cuts off the power to the electromagnet. This releases the metal holder and toasted bread pops up.

How many watts does a toaster use?
A toaster is an easiest and most efficient appliance to toast bread. Standard pop-up toaster uses between 800 and 1500 watts of energy. On average, it uses 1 200 watts.
An average 2-slice toaster consumes a power of around 900 and up to 1 200 watts.
A 4-slice toaster uses more power, ranging between 1 400 and 2 300 watts. An average 4-slice toaster will use 1 800 watts of power.
A toaster oven can replace a standard oven while consuming less power. It uses between 1 100 and 1 800 watts of energy. A higher-powered toaster oven produces more heat and runs faster.

Which Toaster Should I Buy? 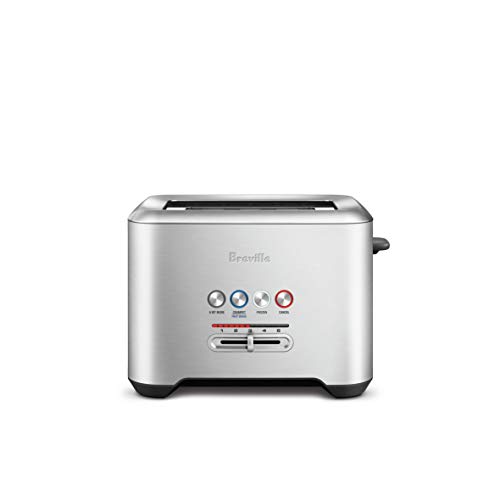 As always, you can never go wrong with Breville. It’s worth it.

Check out my buying guides: